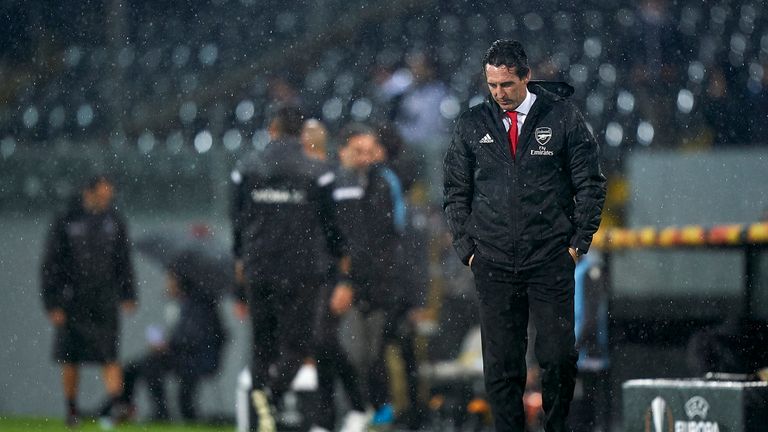 IN KROENKE WE RUST.

Just one shot on target, our worst in the Premier League this season
•Not one shot at all after the 53rd minute, Bellerin’s effort
•This is Arsenal’s worst start to a league season since 1982-83
•Arsenal have had fewer shots than their opponents in 11 of their 18 matches this season. They have out-shot their opponents away from home in just one of nine games (+1 v Sheffield United).
•Our goals conceded per game (1.42) is the worst of the Premier League era
"Wenger's like Mugabe, he won't go".

"Arsenal fans are used to waiting for change. But allowing Emery to persist will be interpreted as passively accepting mediocrity.

Perhaps they could learn something from their opponents. Leicester parted ways with the cautious Claude Puel midway through last season and have been revitalised by Brendan Rodgers’ bold managerial approach. Decisive action has reaped immediate rewards.

Arsenal insist that Emery’s job is not in imminent danger and his post-match demeanour was that of a manager who feels surprisingly assured of his position. The Arsenal hierarchy insist that they don’t want to instigate a carousel of coaches and become another Manchester United. However, United’s failure wasn’t in sacking David Moyes, or Louis van Gaal, or even Jose Mourinho. It was in failing to follow up those decisions with the right appointment. It is not good enough to put off sacking a coach just because you’re scared you might not get the next appointment right.

After all, the former Barcelona executive now has something to lose. Sanllehi, in particular, emerged from the summer transfer window with considerable credit but that will soon disappear if he keeps faith in his countryman. You didn’t need to be Spanish to understand the cries of “Ole!” from the Leicester crowd in the game’s final moments. This was a comprehensive beating delivered by a Leicester team who look increasingly difficult to catch.

It was necessary. This match saw Brendan Rodgers’s side join Chelsea nine points ahead of Arsenal in the race for the top four. It is a gulf of historic proportions: the biggest gap between the top four and the chasing pack at this stage of a Premier League season since 2001. This is now Arsenal’s worst start to a league season since 1982, 37 years ago. Arsenal finished that season in 10th.

And now the bad news: this is the easy bit. Arsenal are in the midst of a relatively friendly run of fixtures. In between December 15th and New Year’s Day, Arsenal host Manchester City, Manchester United and Chelsea, as well as facing trips to Everton and Bournemouth. If Emery stays, it is going to get worse.

Sanllehi needs to recognise that, or the man dubbed ‘Don Raul’ will be swiftly rebranded a dunce. Sacking Emery and his staff and appointing alternatives might be expensive — but failing to get back into the Champions League would surely be more costly.

For the first time in this Premier League campaign, Emery reverted to the back three that he used for much of last season. Given a back four was one of the few discernible elements of the identity Emery was attempting to implement, this was a move with more than a whiff of desperation to it. Emery resembles a frantic gambler, endlessly pulling the slot machine’s lever, hoping he might eventually land upon a winning combination.

This was a game Emery couldn’t afford to lose, but not one it felt like he had the gumption to try and win. Wenger sometimes said his teams played with the “handbrake on”. At the moment, Emery looks like he’d struggle to make it through the theory test.

Pierre-Emerick Aubameyang and Alexandre Lacazette played as split strikers on Saturday, and were detailed to pin back Leicester’s attacking full-backs Ben Chilwell and Ricardo Pereira. It almost worked, for a period in the first half. However, is that really the best use of two £50 million forwards?

Throw in Nicolas Pepe, and Arsenal have a potentially fantastic front line, if Emery was prepared throw caution to the wind and lean into their strengths. Instead, he’s almost apologetic about his embarrassment of attacking riches. Arsenal are the team with the £170 million attack, and the minus-one goal difference.

Ultimately, the first goal decided this game. In their previous four matches, Arsenal had suffered the embarrassment of surrendering a lead. Well, if you thought Arsenal were bad when they were in front, welcome to Arsenal when they’re behind. Emery’s team didn’t manage a shot after the 53rd minute. In that time, Leicester had eight attempts at goal.

There is an expression Emery makes when things go against him, that is becoming all too familiar. A sort of painful grimace that pulls his mouth wide, baring his teeth. If only his team could do the same.

One of the stranger aspects of the evening was the fact that between Leicester’s goals there was a seven-minute period where Emery showed no sign of making a substitution, despite Pepe’s presence on the bench. It was a familiar feeling for Arsenal fans: waiting for a change that doesn’t come.

It’s now down to Sanllehi, Edu and KSE to deliver one. The intervention of the owners could prove crucial here. They just about saw off the #WeCareDoYou rebellion with smart talking and transfers. That has earned the Arsenal board a modicum of trust.

However, the way things are going is not a good look for them, and if they allow Emery to persist, it will be interpreted as passively accepting mediocrity.

That bond of trust is more delicate than ever. If they really cared about Arsenal, they would not allow this to continue."